This morning was absolutely beautiful. It was a bit cooler, only getting up to 84 degrees today, and perfect with the clouds. Our plan is to go Miniature Golfing at Winter Summerland Miniature Golf Course. I am thinking that I am OK with not going directly to the parks. So, off we went to enjoy the cooler weather… well, cooler for Florida.

We arrived at Winter Summerland Miniature Golf Course, and it is so very cute! As we were going in, we were greeted by a really nice family coming out of the course, so I greeted them back and I asked, “Who won?”  The dad said, “I think he did!” as he pointed at his son. The little guy was smiling the biggest smile and said, “Oh! Yes, I did!” I congratulated him and we all were off. We saw Santa’s sleigh pulling an Airstream trailer as we rounded the corner. As we walked toward the Airstream, we offered to take a picture of the family that was climbing into the sleigh! I asked who won; the mom said they really didn’t keep score, and the dad said that he was sure the little girl won! “Congratulations! High five!”

We got checked in for the summer course and picked our color of golf balls! Purple for me, Pink for Tooti, and blue for Twinkie! We started the course and it is the most fun I have had in years on the mini-golf course! We laughed at how funny each of us are hitting the ball and trying to play on such a clever course. Each new hole has a hint of how to do your best if you get the clue. I would highly suggest getting to play this course; it was a hoot! 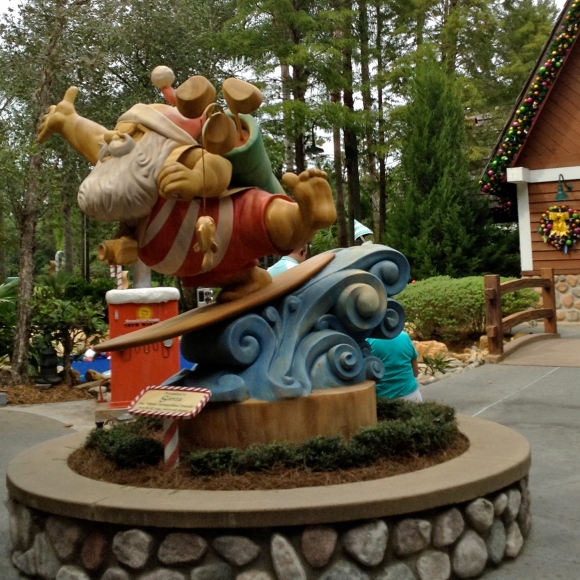 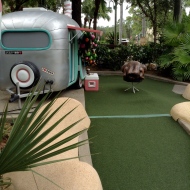 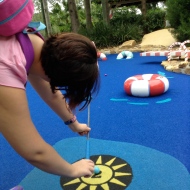 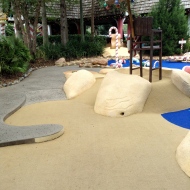 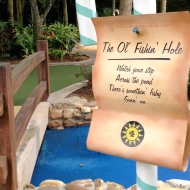 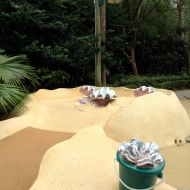 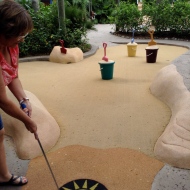 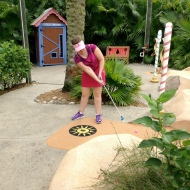 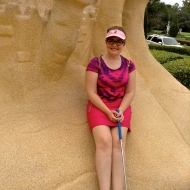 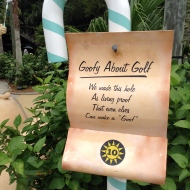 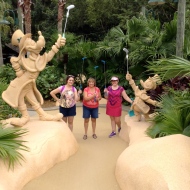 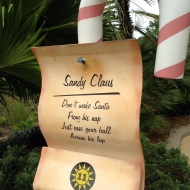 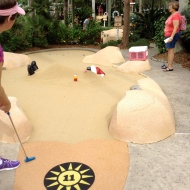 Tooti hit one out of bounds! LOL 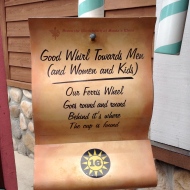 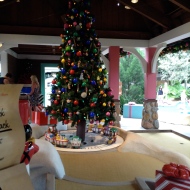 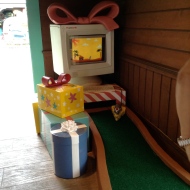 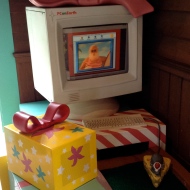 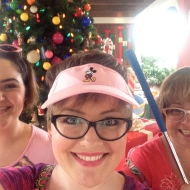 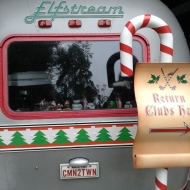 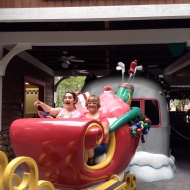 Then, we exited reading the signs and got into the car to head for Magic Kingdom.

There was a nice couple on the Ferry Boat; the wife wanted to talk and I found that they were visiting from Houston, so the weather was fine for them. Before moving to Houston, they came from Pakistan. As we were exiting the ferry, I hollered back at them, “Have a wonderful day!” and got the nicest, unexpected, happiest words of thanks for chatting! It was very nice to hear those kind voices.

Passing on the waters… 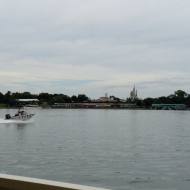 The park was more relaxed today and Main Street seemed more elegant. There was something about today – the shops looked crisp with the cloud cover and the windows looked softer with the lace curtains. Even the lettering on the storefronts gleamed with gold lettering. We did some pin trading and then split up to get a bite for lunch. Tooti and Twinkie off to order our gluten free hot dogs at Casey’s Corner, and I went to get some iced tea at Starbucks in the Main Street Bakery. We sat outside Casey’s Corner at the tables with umbrellas. We could hear the Dream Along with Mickey music in the background; it is a very relaxing spot to eat.

As we were pin trading back toward the front gates, there were a couple of games going on: the beanbag toss, and the word scramble game.  We stopped and played the word scramble game and chose to hang around until a good crowd gathered. A preteen little dude actually went up and unscrambled a word. I turned to his mom and said, “That takes a lot for a preteen guy to do this!” She said, “I know!” She was so proud of him! When he finished unscrambling the word, Timon, we gave him a standing ovation! He was so cute! 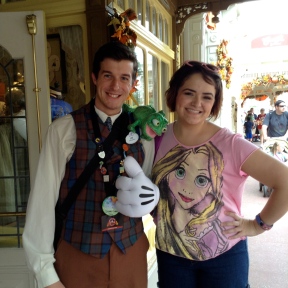 Pascal is on his shoulder!

Word descrabling… Tooti did the Rafiki one! 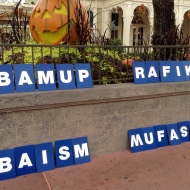 Can you guess the others? 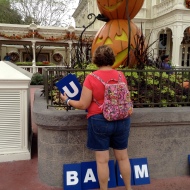 Now off to the Monorail and head home! It was a refreshing day!