Yay! I want to go to Hollywood Studios to explore the Walt Disney: One Man’s Dream attraction. As we approach the parking lot, we see it is pretty full and it is not quite 11:00 a.m. This morning there was a 5K and then tonight there is the Tower of Terror 10 miler. As I assessed the growing crowd, we chose to go to Animal Kingdom instead.

On the way to Animal Kingdom, we were going past Coronado Springs Resort (one of our favorites!) and decided to drop in for some pin trading. Pin trading is a fun event, especially if you are in the parks for more than 3 or 4 days. It is fun looking for specific pins. We also took a moment to look at the beautiful lake. 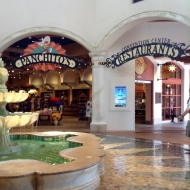 The Store and Restaurants 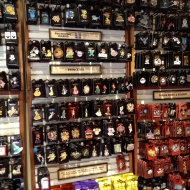 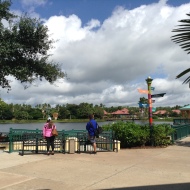 Animal Kingdom proved to be a great choice. The weather was hot, but the clouds were rolling in and soon there was a good cloud cover. We parked in the Peacock parking lot and I caught the Tram while the kids walked to the gate. We arrived at the same time! I forgot my regular shoes but had a spare pair in the car. I try to keep backup shoes in the car just in case it rains or if I accidentally make it out to the car in my heeled Crocs slides.

I wanted to stop at Guest Relations to check on how many days have we been to Disney World Parks. Yesterday, we were stopped three times to take a quick survey and one of the questions was, “How many times have you been to Disney?” I said that we should pick 40 and the kids said 80… they were closer. We upgraded our Disney Tickets to Annual Passes last fall and the total to date for the annual year is 83. Then, we added in the trips since 2012, and the one trip we made in 2001. So, our grand total is, as of today, 100 park visits!

Trading pins with a Cast Member!

There was such a quiet bustling to the day. It was laid back, and the animals were busy enjoying the cooler air. Of course, our first ride is Kilimanjaro Safaris, my favorite. It is busy, but calm today. Our time out on the Safari was longer than normal, as some of the animals were crossing the road at a slow pace. I love these days; I can enjoy watching the giraffes and the rhinos, of course all of the other animals too, but these two are my favorite. The question of the day is: Are zebras white with black stripes or black with white stripes? The Safari was about twice as long as usual and totally amazing. 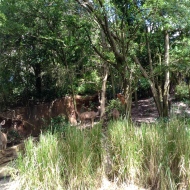 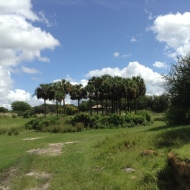 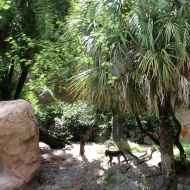 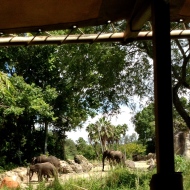 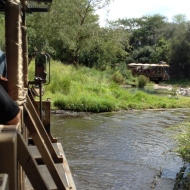 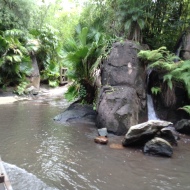 As we were walking to get tea, I noticed that the owl on the Tree of Life was standing out more than usual. The cloud cover and angle of the sun made me need to stop and take a picture. It is the most amazing tree.

We grabbed a peach tea and went to sit by the water on Discovery Island to watch the birds and reflections on the water. Now, off to find more pins and head for the front area.

As we were walking down the Oasis, a lady was talking and her friends asked her what she was saying. She told them that she was finishing a conversation from something someone in another group had said; she likes to do that. I leaned in and said, “I never do that. I never say anything about a conversation someone else is having.” They busted out laughing. I love fun people. She ended up on the same Tram we were on! I know because the guys behind us, from England, joined into our conversation and I told them about the lady at the Oasis, and she, sitting two rows in front of us, said, “That was me!”