It was pouring as we headed out for Epcot. Then, it stopped, poured, and stopped again as we neared the park. We parked on aisle 50 once again! How do we keep being directed to that parking aisle? No problem, I looked over the top of the trees for Spaceship Earth. Found it. Now, what’s the quickest path from point A (us) to point B (Spaceship Earth)? We found a new walking path and headed in. As we entered the park gate, there was a lady from South Africa that loved the kids’ Frozen shirts! As we talked, she was so nice that we asked if we could have a picture with her, and her son jumped into the pic too! Fun! 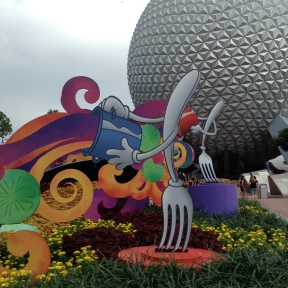 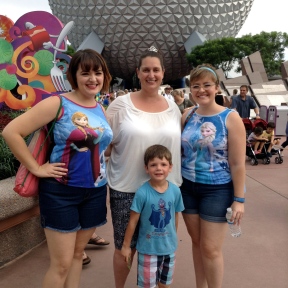 All the way from South Africa 🙂

Off to the America Pavilion to watch Hanson, but the line was amazingly long. We waited for a little while and realized that the number of people in line already exceeded the number of seats in the theatre. We ducked out of the rain to sit in Italy for a few minutes. While we were there, we met a really nice couple with two beautiful daughters. It was fun talking and visiting with them!

This reminds me about the other night at Epcot. As we were leaving, I saw a little girl with a frown and tears rolling down her face. “Are they putting up your ‘carriage’? Oh! You’re a little princess and they are putting up your ‘carriage’.” She smiled and hugged the little railing near her and nodded. I had overheard her grandparents telling her to stop crying as they pushed the stroller away, but I knew that in her little heart she saw the stroller as her “carriage.” Thank you, Molly A., for letting me learn that little treasure from you and your family! 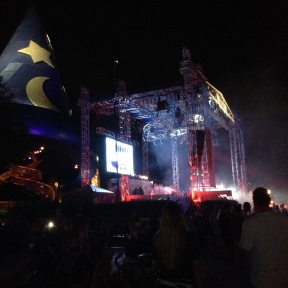 Almost time for the show!

We made it to Hollywood Studios and enjoyed the bustle of people waiting for the show to start. While we were waiting, we met another really nice family. The mom mentioned that the kids didn’t want to stay, but she was hoping the fireworks would be worth it. I told her they are absolutely worth it! When my kids were little, they would tell me, “I don’t want to do something,” and I would tell them, “That’s just fine, but I want to!” She laughed! They did stay and it was so worth it!

As the fireworks came to an end, it was snowing! All the way from Mickey’s sorcerers’ hat to the front gates it is snowing! I love meeting so many people.

Heading home, we realized we had six minutes before the Mickey’s Not So Scary Halloween Party fireworks started; we could make it to the parking lot, catch the ferryboat over to Magic Kingdom, and see the Not So Scary Fireworks from the Ferry! It took me eight minutes; my kids can walk faster than fast. They made it to the entrance of the ferry and they were going to wait for me. I hollered, “See if they can wait for me!” I was a little ways back, but the deckhand teased me and said that my kids had told me to shut the gate; don’t let mom in! Funny guy!

We hurried onto the ramp and up the stairs to the front of the ferry and watched the Not So Scary fireworks from the stem of the boat!!! WOW! This show even has panoramic fireworks! It is so beautiful!